Testing a ’60s vintage Sulzer OCXO — with a twist

Over the years I’ve acquired a whole bunch of Sulzer OCXOs.  One is dead, several have oven temperature control problems, but I have three powered up in the rack that still work amazingly well.

This one, Sulzer #3, is particularly interesting.  It’s not on the standard 2.5 or 5 MHz frequency.  Instead it runs at 5.006 880 MHz.  That happens to be a submultiple of the Cesium transition frequency.  And I’ve been told, but unfortunately can’t prove, that this unit came out of NBS in Boulder.  Hmmm… 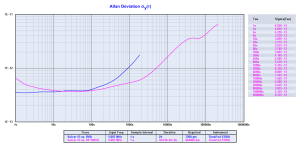 That’s not too shabby.

I also did a phase noise measurement against both a Wenzel ULN and the BVA. 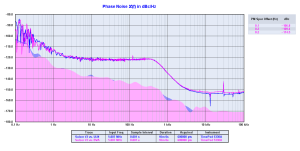 Note the steep drop at about 500 Hz.  I am guessing there is a crystal filter in the unit to drop spurs.  -115 dBc/Hz at a 1 Hertz offset isn’t too shabby; in fact, that’s about what both the ULN and BVA are rated for, so the chances are the actual value is a bit better.  The noise floor isn’t all that hot, but let’s give 1960-era designers a break!

I’d really love to know if this oscillator was involved with NBS-2 or NBS-3.