It wasn’t too hard for the HamSci guys to convince me to bring a Cesium frequency standard to my portable location in Michigan to drive the HPSDR receiver that will do band recordings for the 2017 Total Solar Eclipse HF Wideband Recording Experiment. I had been planning to use a GPSDO, but that would be too simple.

My “sort-of-portable” Cesium is an old FTS-4100 that came out of military service. It was designed for shipboard use (I think as part of crypto sysstems) and there’s not a lot of information available on line about it. It weighs probably 25 pounds and is just a white box with big heatsink and tiny control box bolted to the front. It has two 5 MHz outputs. Just to verify that it’s still working after several years in standby mode, I powered it up this week and did comparisons with an HP 5071A cesium to check on the frequency offset, and also with a quartz BVA oscillator to look at the short term performance.

Bottom line: this thing works really well. It’s frequency is within 1e-12 compared to the 5071A, and its short term noise may be the best of any of my Cesiums; that’s a good thing for this radio experiment. Plots below. 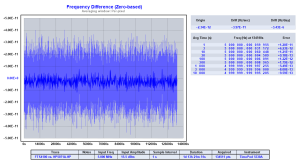 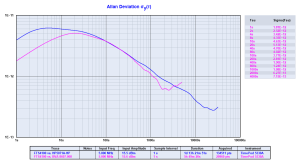