An interface from Hermes/ANAN to the TASS relay board

I didn’t even think of it when I was designing the TASS-R relay switch system, but the relay board can be used with an HPSDR Hermes, ANAN-10, or ANAN-100/200 radio without requiring use of an Arduino or other controller.Â  These radios provide 7 open collector outputs that can be programmed from within the PowerSDR software.Â  A simple interface board allows the TASS-R to be controlled by these outputs.

The idea is that two of the outputs can be used as binary bits to control one half of a decoder chip (74HC139) that will drive 4 of the TASS-R’s relays.Â  Two more outputs fed to the other half of the chip can drive the other 4.Â  If you want to control the branching relay (“K9”) a fifth output can be used for that with a simple transistor inverter.

This setup would allow you to switch up to four filters/preamps/ in a double pole configuration, based on the band selected in PowerSDR.Â  Or up to 8 receive antennas could automatically be selected.Â  Or whatever else you’d like to do.

Here’s a schematic for such a board.Â  I haven’t built it yet, but it *should* work. 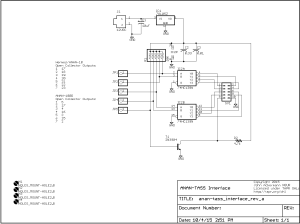