I’ve noticed that my SDR setup, an Apache Labs Anan-7000DLE transceiver used with the PowerSDR software, seems to rest the S-Meter at a quite high level when there is no signal present. This is unnerving when I try to compare my local noise floor with others who claim noise levels many S units below mine. I recently reinstalled PowerSDR and recalibrated the receiver amplitude. While I was at it I thought I’d document the HPSDR power meter performance, and also that of an Icom IC-7300.

These are some screen shots showing before and after calibration, and at the end a comparison with an Icom 7300 radio hooked to the same antenna. All the PowerSDR readings werre taken with the same receiver settings. The mode was set to AM and the filter bandwidth manually set to 2.4 kHz to be consistent with most radios in upper sideband mode. (In PowerSDR the S-meter reading is based on the total power within the bandwidth, so a narrower bandwidth will show a lower noise floor than a wider one.)

First, the display before calibration, first with a 50 ohm dummy load and then with a -50 dBm signal applied: 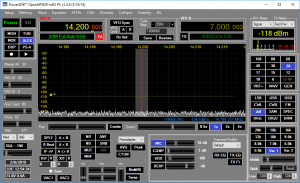 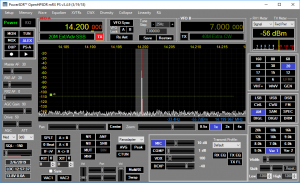 You can see that the meter reads about 6 dBm lower than it should. I can correct that by using the PowerSDR calibration routine that uses an external signal generator to calibrate the receiver chain. These are the results after doing that: 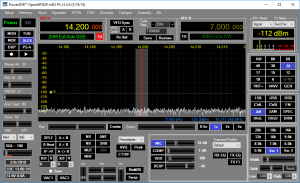 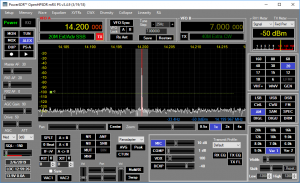 Now, the S-Meter shows exactly the signal generator level to be exactly -50 dBm, and the noise floor has gone up by 6 dB as well. The analog meter shows between S2 and S3 which, for -112 dBm noise power, matches pretty well the “Collins Standard” as shown by K9LA’s S-meter calibration table.

Now, let’s connect an antenna and see what happens: 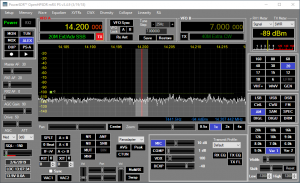 Now the meter shows -89 dBm and S6 to S7, and again that tracks the Collins standard. The other rigs in Carl’s table would show a bit under S5 to S6. The noise floor shown on the spectrum display has gone from about -130 dBm to about -115 dBm. 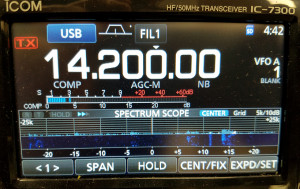 It’s showing between S2 and S3. For fun, I did a calibration of the IC-7300 S-Meter and came up with this table:

It’s pretty clear that the only thing Icom knows about the Collins Standard is that S9 is -73dBm. Below that point the scale is more like 3 dB per unit than 6 dB, and anything below -98 dBm doesn’t exist. That explains the very low noise levels this radio tends to report.

Update on Update on P25 Scanner

After haviing my IC 7300 for just over a year that the S Meter reading goes up by about 2 S Units when I apply p.amp1 then another 2 S Unit with p.amp2.

Based on your chart, looks like S9 with no p.amp on is about right.

Will compare it to my K3 in the near future.

I just don’t know what signal reports I should be giving based the setting of p.amp

Guess it is time for me to investigate further.

Your table at the bottom of this article related to the IC-7300 corresponds pretty good to my lookup table for the IC-7300. I also calibrated my IC-7300 using a signal generatorand the special IC-7300 service menu according to the service manual. After that I applied different signal levels and created a lookup table (pre=off, pre=1 and pre=2) so I have quite a good overview of what the IC-7300 is reporting. Conclusion is the same as you did: the first bar in IC-7300 corresponds to -97.9 dBm (that is about S4.9). What does that mean? An IC-7300 looking at the S-Meter (preamp=off) and realizing no signal (or 1st bar flickering) would think his noise is very low because it shows S0. In real it is S5 !!! according to IARU collins standard. The scale is about 3dB and the S-Meter in IC-7300 is not linear. The most accurate values are at S9 and higher. Shame on ICOM because they could correct this very easily in the firmware, as this is a SDR device. Obviously they are not interested in doing so, although they are aware about this issue. I also had contact with the technical support and they know very well about this issue but they told that they will not invest anything more in correcting this. Very sad to hear that, because it’s very easy to fix that in software inside IC-7300.